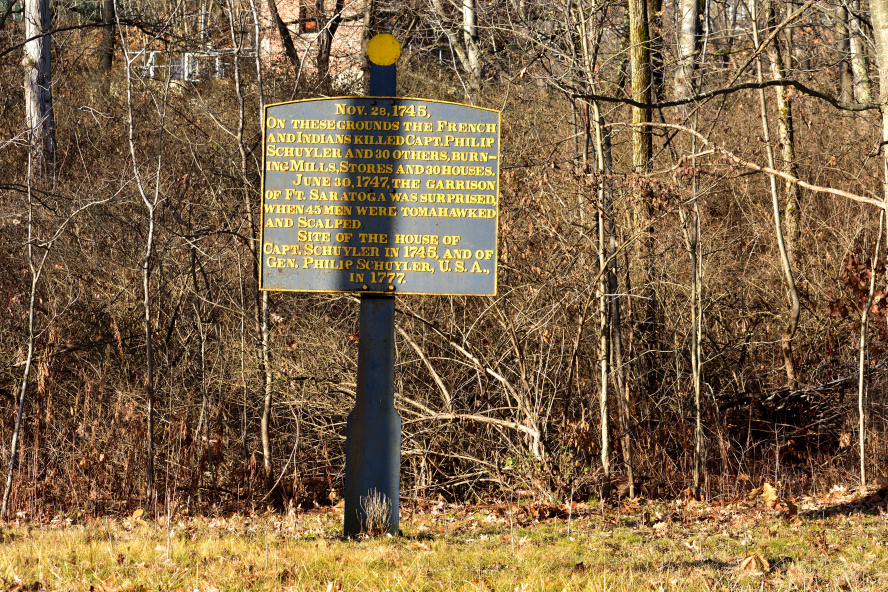 Historical marker next to the house of General Philip Schuyler at Schuylerville, NY, to commemorate the site where French and Indians killed Captain Philip Schuyler, and tomahawked and scalped dozens of men in 1745 and 1747

From time immemorial the Woodland Indians roamed the banks of the Hudson River in the vicinity of Schuylerville until displaced by the Iroquois people some five hundred years before Columbus’ discovery of America.

The Woodland’s characteristic intricate crosshatch ornamentation has been found on pottery shards near buried fire pits almost always within a dozen rods of the river’s edge. Indeed, a notable find is located at the very site of the first European outpost here, the so-called Fort Vrooman, a house ordered fortified by the authorities at Albany in 1689.

For centuries our valley was the hotly contested border between the Mohawks, an Iroquois tribe, and the Mohicans, an Algonquin people. To the aborigines the area was known as Sa-ragh-to-ga, meaning “hillside country of the great river” or perhaps “place where the waters meet” inasmuch as the Fish Kill flowing from the west and the Batten Kill from the east enter the Hudson at this place and thus formed a vital waterborne transportation hub.

It was to this area that the first Europeans were attracted for the same reason. Major Peter Schuyler, then mayor of Albany, cleared a spot in the forest and built a blockhouse in 1690, giving to it the name Fort Saratoga. Soon, in the opening years of the eighteenth century, small mills harnessed the abundant waterpower offered by the kills (creeks), and homesteads appeared.

On November 17, 1745, the hamlet of Saratoga, consisting of some thirty families, was attacked and destroyed. Most of its inhabitants were massacred by the French and their Indian allies who by stealth had swept down from Canada. Peter Schuyler himself was killed in his own house.

In June 1749, the Finnish explorer and naturalist Pehr Kalm traveled up the Hudson River and described the devastation he saw after the French-Indian War: "Our last night's lodging was about ten English miles from Albany. During the last war, which was just now ended, the inhabitants had all retreat from thence to Albany, because the French Indians had taken or killed all the people they met with, set the houses on fire, and cut down the trees. Therefore, when the inhabitants returned, they found no houses, and were forced to ly under a few boards which were huddled together.[...].

"Saratoga has been a fort built of wood by the English, to stop the attacks of the French Indians upon the English inhabitants in these parts, and to serve as a rampart to Albany [...]. There was an island in the river, near Saratoga, much better situated for a fortification. The country is flat on both sides of the river near Saratoga, and its soil good [...]. We saw some hills in the north, beyond the distant forests. The inhabitants are Dutch, and bear an inveterate hatred to all Englishmen." (Kalm, Pehr: Travels into North America, vol. II, Printed for the editor [William Eyres] and sold by T. Lowndes, London, 1771, pp. 283 and 290-91.)

During the dozen peaceful years before the outbreak of the American Revolution, life began anew with the coming of the DeRidders, Abraham Marshall, Thomas Jordan, Conrad Cramer, John Woeman, William Green, Thomas Smith, the Welches and Strovers, the Dunhams, James Brisbin, George Davis and Sherman Pattison, all settlers who arrived during this interval. Many of these names yet attach to local places and four corners, to descendants, and to headstones in family and public cemeteries.

In 1767 Phillip Schuyler erected on the bank of the Fish Kill the first flax mill in America. In 1770 the Dutch Reformed Church built its first meeting place, later used as a hospital during the Burgoyne Campaign. The subject of this article, The Marshall House, was completed in 1773 and is the sole surviving pre-revolution building in this historic vicinity.

Click for full size pictures
Present Seat of War Between Great-Britain and her Colonies in North America, Universal Magazine, 1776
Title page of Pehr Kalm's Travels into North America (1771 English translation)
Map of the Hudson Valley by Peter Bell, 1772
Romanticized Indians venerating the mineral water at Saratoga Springs in an 1907 postcard
Confluence of the Hudson River and Batten Kill, just below The Marshall House (Benson J. Lossing: The Hudson, from Wilderness to the Sea, 1866)
Between 1689 and mid-18th century, the land occupied by present-day Schuylerville hosted three forts that were destroyed by the French in successive attacks