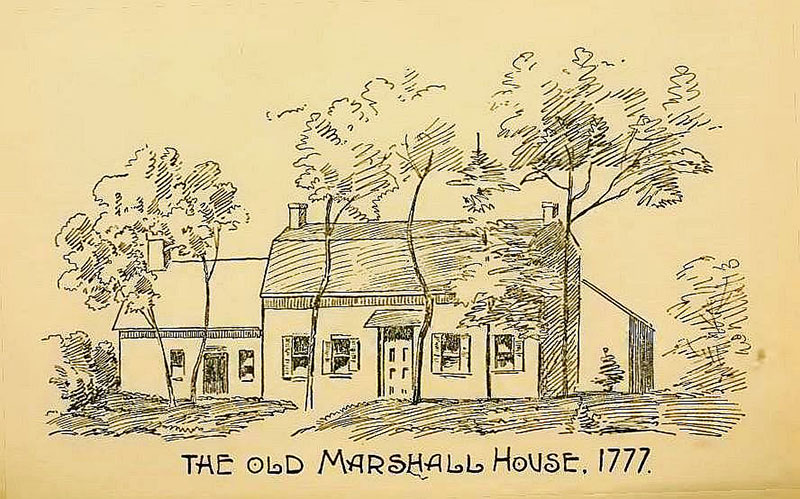 In June 1749 the Finnish explorer and naturalist Pehr Kalm reached Saratoga during is exploration of the Hudson River valley. His description of the houses he saw then would apply to those built two decades later. One such is the Marshall House where sheltered Baroness with her little children together with other women and wounded men during the closing days of the Battles of Saratoga.

"The farms were commonly built close to the river, on the hills. Each house has a little kitchen-garden, and a still lesser orchard. Some farms, however, had large gardens. The kitchen-gardens afford several kinds of gourds, water-melons, and kidney-beans. The orchards are full of apple-trees [...]. The houses hereabouts are generally built of beams of wood, and of unburnt bricks dried by the sun and the air. The beams are first erected, and upon them a gable with two walls, and the spars.

"The wall on the gable is made of boards. The roof is covered with shingles of fir. They make the walls of unburnt bricks, between the beams, to keep the rooms warmer; and that they might not easily be destroyed by rain and air, they are covered with boards on the outside. The cellar is below the house. The farms are either built close to the river-side, or on the high grounds, and around them are large fields with maize." (Kalm, Pehr: Travels into North America, vol. II, Printed for the editor [William Eyres] and sold by T. Lowndes, London, 1771, pp. 284-5.)

The Treaty of Paris, signed February 2, 1763, brought to an end the French and Indian War which had ravaged the northeastern colonies. Invasion and raids by the French devastated the upper Hudson River valley.

With peace, settlers returned and new families arrived, many of them enticed hither by the enterprising Schuyler family of then Saratoga who offered land on generous terms and ready markets for timber and produce. In 1770, six years before the outbreak of the American Revolution, one Peter Lansing of Albany began building (in 1770) what is now known to history as The Marshall House.

Lansing’s ultimate purpose remains unclear. Several accounts suggest that his purpose was to install a family that would sustain itself by farming while collecting products for shipment downriver to Albany for marketing through his offices. Others say that Lansing intended a summer home.

Alas! The Revolution soon put whichever plan to naught. The house he had built, however, became the scene of events tragic and heroic that established it as an important landmark in our nation's history.

This site, then, tells the story of a remarkable old house and of the men, women and children, some famous, others obscure, who have dwelt here, some for a few days, others for generations. The Marshall House remains a witness at once truthful and gracious to the birth of our Republic and that which has passed since.