Timeline - A week in hell 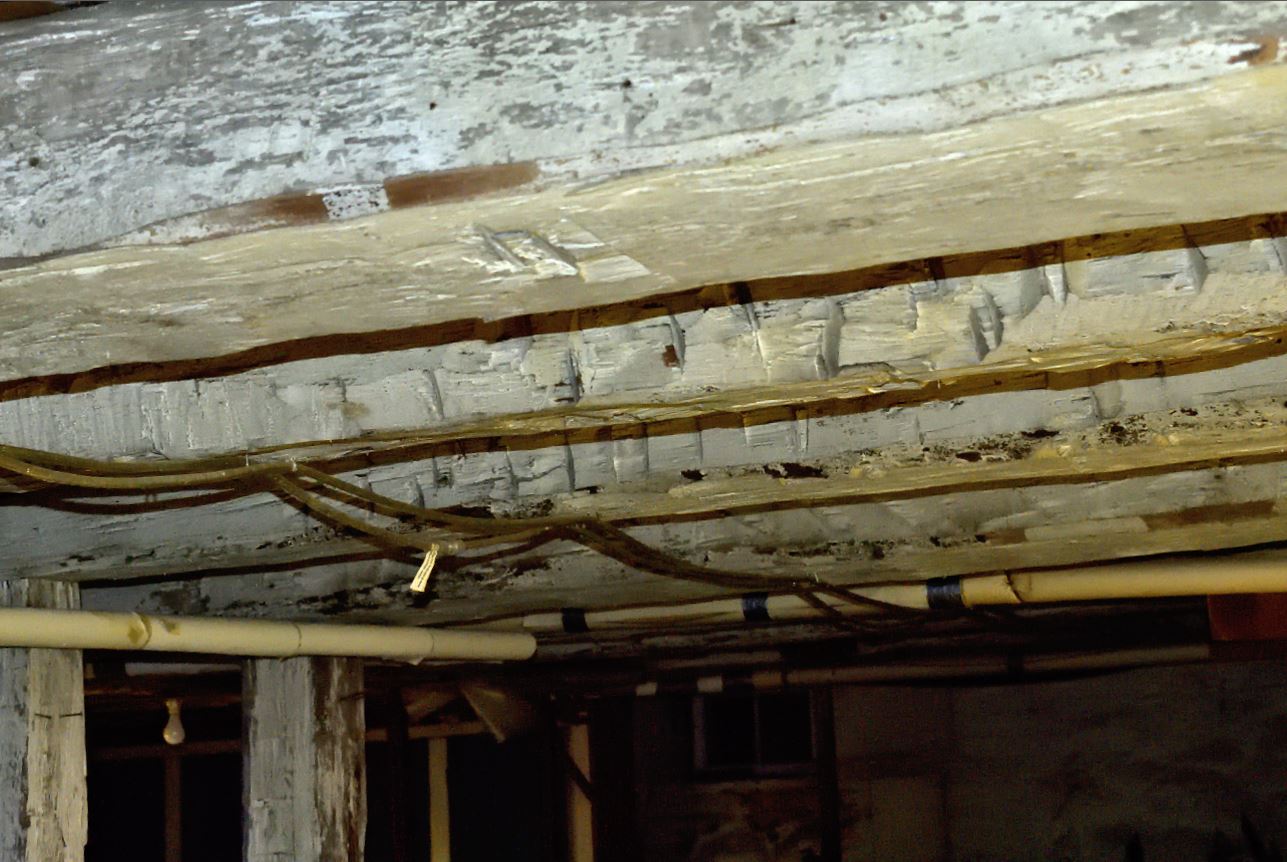 The cellar: the Baroness took refuge with her daughters beside this wall

A catastrophic retreat - General Phillips to the Baroness: “I wish you were our commanding officer!”

Second Battle of Saratoga at Bemis Heights. On the day of the unexpected battle, the Baroness prepares for Generals Burgoyne, Fraser and Phillips to dine with her and her husband in the evening. She observes “savages in their war dress” and asks them where they are going. They reply “War, War!” and within the hour she hears the battle with intense cannonade.

3 p.m. British troops arrive at the Baroness’ log house with General Simon Fraser mortally wounded. The dining table is cleared and a bed for the wounded Fraser is put in its place.  General Fraser knows that he is dying, moaning “Oh fatal ambition!” and makes a final request to be buried the next day at 6 p.m. on top of the hill near the Great Redoubt.

6 - 7 p.m. General Riedesel informs the Baroness that things are not going well and to prepare to leave at a moment’s notice, but to refrain from mentioning this to anyone.

Not far from the Baroness’ block house, Lady Acland has a tent where she sleeps and returns to camp by day. A messenger arrives to tell her that her husband, Major Acland has been wounded and taken prisoner by the Americans. The Baroness spends a good part of the night consoling Lady Harriet and encourages her to gain permission from General Burgoyne to go to the American side to nurse and tend to her husband. 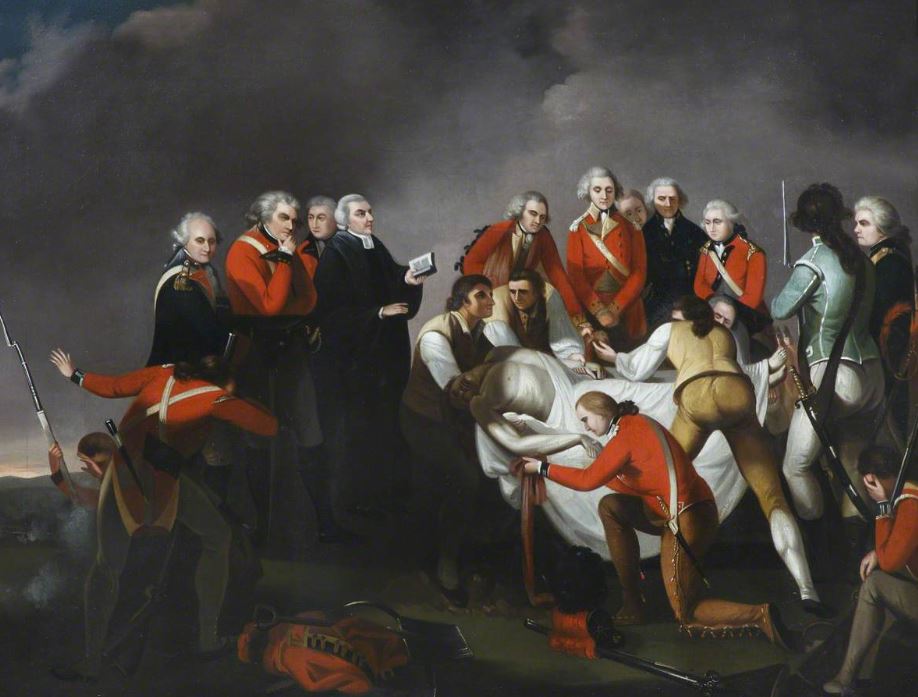 The Burial of General Simon Fraser, by John Graham (ca. 1800)

8 a.m. After much suffering through the night, General Fraser dies at approximately 8 a.m.  Orders come in that General Fraser is to be buried at 6 p.m. that evening on the requested hill. This delays any retreat.

6 p.m. The Baroness witnesses the burial of General Simon Fraser on the Great Redoubt. All the Generals are gathered on the hill while under enemy fire. “Many cannon balls sped through the air not far from me, but I has my eyes fixed on the hill where I distinctly saw my husband in the midst of the enemy’s fire.”

8 p.m. The Baroness is ordered by the wounded Major Harnage to take her children into the calash and travel north for safety. When she refuses, he then states that he will at least take her children and save them from danger. Thus, he persuades her to retreat in the calash.

8 p.m. - 6 a.m. The Baroness travels all night in the pouring rain in her calash with her young children covered with oil cloth for protection. 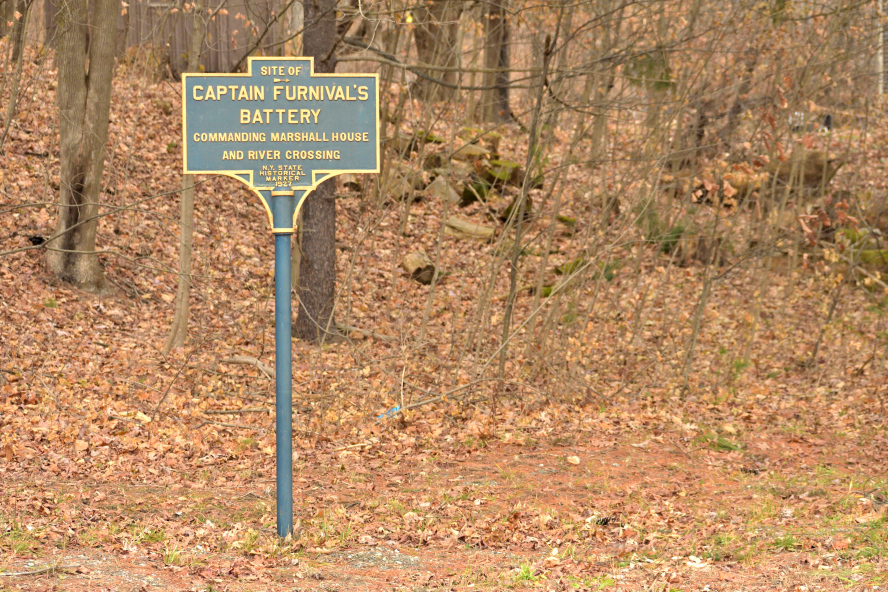 From this hill in Washington County, above the west side of the Hudson River, The Marshall House was cannonaded by Captain Furnival’s battery

6 a.m. The retreat is halted.  Burgoyne requests that all cannon be counted. General Riedesel joins his wife in the calash and is able to sleep for 3 hours.

9 a.m. The retreat commences, but at a frustratingly slow pace.

10 a.m. After barely an hour, another halt is called because enemy scouting parties are seen. The Baroness is very critical of Burgoyne for this unnecessary halt writing that these enemy scouts could have been easily taken prisoner.

11 a.m. – 6 p.m. The Baroness and her children remain in the pouring rain through most of the day waiting for orders to continue the retreat.

Dusk - The calash finally arrives in Saratoga (present-day Schuylerville) only a half hour’s march from the last halt. General Phillips inquires on the Baroness’ welfare. She asks why were the troops and retreat halted for the entire day. General Phillips commends her fortitude: “My poor woman I am amazed at you…” commenting that she is soaked to the skin. “I wish you were our commanding officer!”

Baron Riedesel's camp, left center, and three hundred yards away, the "farm house" (now The Marshall House), extreme right - From A State of the Expedition from Canada as Laid before the House of Commons, by Lieutenant-General Burgoyne, (J. Almon, London, 1780)

7 a.m. After spending the night in Saratoga, the Baroness refreshes herself with some tea and hopes the retreat will get under way again.

12 noon An English Officer, Lieutenant Fitzgerald, brings the Baroness some warm broth to sustain her. After delaying for most of the morning, the retreat march commences.

12:30 - 1 p.m. Only a short distance is travelled. Commissaries have forgotten to distribute provisions to the troops and have failed to slaughter and prepare available livestock. More than thirty officers approach the Baroness begging for food. She shares tea, coffee and all of her provisions with them.

1 p.m. The Baroness’ provisions run out. She calls out to Adjutant-General Petersham who is passing by. She pleas passionately for these officers who are in desperate need of provisions. She tells him to immediately inform General Burgoyne about this predicament.

1:15 p.m. General Burgoyne arrives upon the request of the Baroness. She asks his pardon for meddling. She explains to him that her entire stock of provisions has been distributed, but that it is impossible to keep still, knowing these gallant officers are in need of everything! He thanks her and complies with the request, but the Baroness admits that he never forgave her for “my interference.”

1:30 p.m. Once again, Burgoyne requests another halt of the troop movement to distribute provisions thus delaying the retreat even longer.

2:00 p.m. Cannonade and the firing of small arms is heard. Confusion and alarm break out among all. General Riedesel sends his aide to instruct his wife to quickly retreat in the calash to north of the Village where there is a farmhouse overlooking the Hudson River.

2:30 - 2:30 p.m. The Baroness arrives at the “farmhouse.” She observes 5-6 militiamen with muskets aimed at the house on the other side of the river. She quickly hurls her children to the bottom of the calash and spreads herself protectively over them. At that exact moment, the militia takes aim and fire. A wounded English soldier about to take refuge in the same house has his arm shattered. Mistaking the farmhouse for a British headquarters, the militia detachment serving under Ebenezer Matoon continues to fire upon the house.

Upon entering the house, the cannonade begins. The Baroness and her children take refuge in the cellar of the house. At least four other officer’s wives and some wounded soldiers are huddled in the cellar: Mrs. Reynell, Mrs. Harnage (and the wounded Major Harnage), Mrs. Fitzgerald, and the “Commissary’s wife.”

3:00 p.m. Upon entering the cellar, the crowded group continues to hear enemy fire upon the house. The Baroness, other women and children and the wounded spend the entire night in the stench of the dark cellar lying awake in fear. 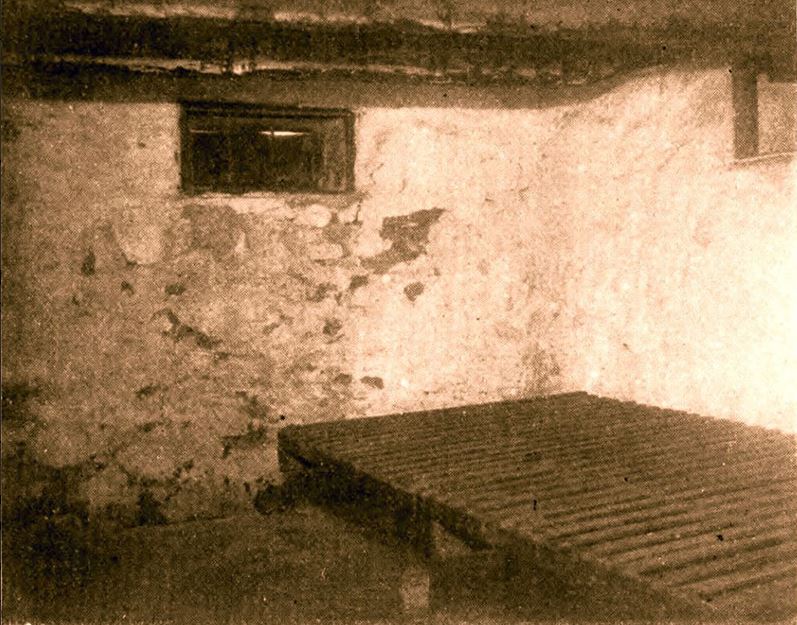 First known protograph of the cellar, second half nineteenth century

6 a.m. The following morning, cannonade continues, but now from the opposite side of the house. The Baroness takes this opportunity to rally all refugees from the cellar, orders the able-bodied to sweep out the human waste; she again takes command and with assistance, fumigates the floor with vinegar and coals.

The Baroness is aware at this time that cannonade coming from the western side of the house means that the British troops are now being surrounded by American troops. They have lost their window of opportunity to retreat.

Upon returning to the cellar, the inhabitants settle into a more organized and clean surronding. Mrs. Harnage and Mrs. Reynell with children shelter in a separate area with a curtain hung; the wounded are given a place of their own, and the Baroness prefers to stay in a corner near the door should there be a need to escape.

Upon returning to the cellar, fresh cannonade immediately commences. Many others in the house attempt to descend to the cellar for cover, but the Baroness holds back the door to protect her children from being crushed. The cellar occupants hear a total of eleven cannonballs rolling on the floors above.

At this time, a wounded soldier lies on a table prepared for amputation while others run for cover. A cannonball comes at table height and tears off his good leg. The man is later found by his comrades crouched in a corner where he has dragged himself, barely breathing.

On this day, a messenger arrives in the cellar and calls for Mrs. Fitzgerald. Her husband has been struck by a cannonball, his arm torn away at the shoulder. This was the kind officer who had shared his broth with the Baroness the prior morning.

After spending the night moaning in misery in the cellar, Lieutenant Fitzgerald succumbs in the morning.

The General visits the Baroness and the others in the cellar to relieve their anxiety. At night the women, the children, the wounded soldiers and three British officers remain in their shelter. The officers promise the Baroness that each is prepared to take a child on horseback should a hasty retreat be ordered.

During the terror-filled nights, little Frederika would often cry. One of the three officers would then imitate the sound of a mooing cow and the bleating of a calf. This diversion would cause her to immediately stop, giving them all a laugh during the long ordeal.

A brave woman at the house, a camp follower wife of a British soldier, volunteers to go down to the river to obtain water. Not a shot is fired at her. The Baroness commends the behavior of these American militia noting that they are defending their “fatherland” and that they "respect women.”

The Baroness tends to the wounded. One such person, Major Thomas Bloomfield, aide to General Phillips, was wounded by a bullet shot through both cheeks. Barely able to swallow due to the infection, the Baroness instructs him to keep some of her wine in his mouth at all times. Forever grateful to her, the infection is cured within a day.

At this time, there is a ceasefire and talk of capitulation as General Burgoyne and his officers form a council of war to formulate terms of a convention.

The Baroness is visited by her husband the General twice daily to ensure her welfare. During this reprieve, he sleeps in the house at night in one of the front rooms in a corner while the Baroness has made a bed in the adjacent hall.

General Riedesel is called back to duty and the Baroness returns to the cellar.

The Capitulation – The Baroness to General Schuyler: “You are so good to me.” 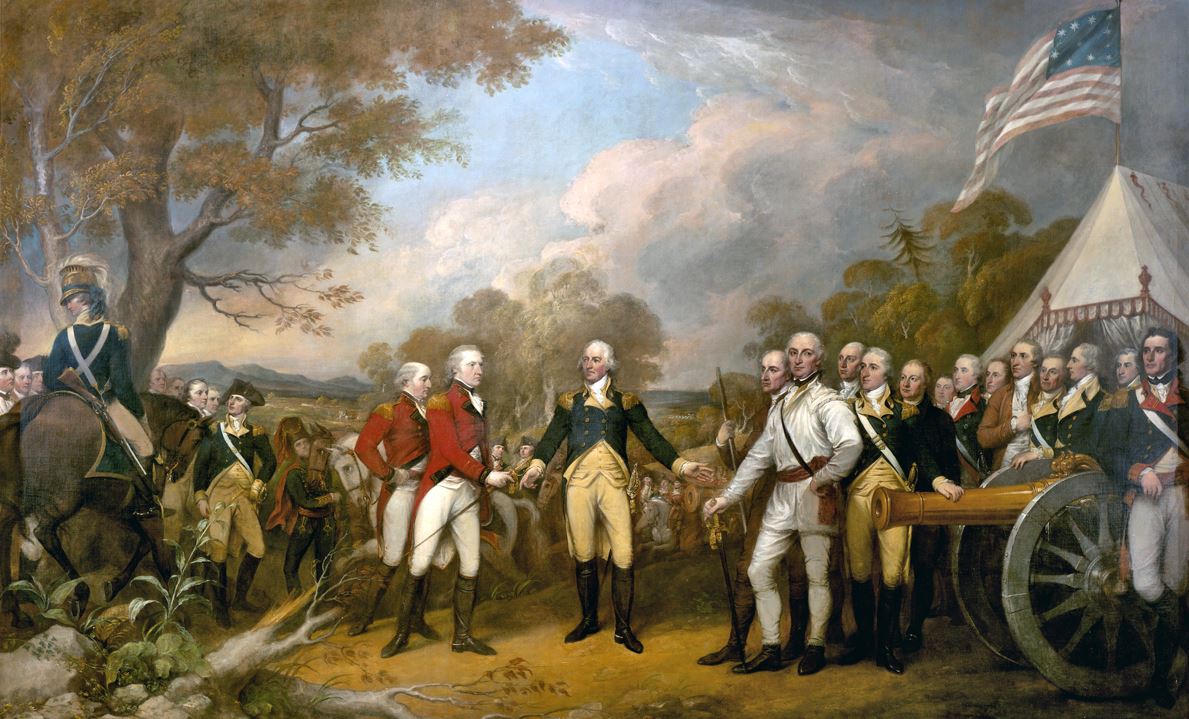 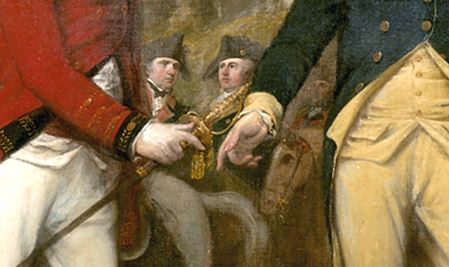 The terms of the capitulation by Burgoyne have been agreed upon and go into effect. The troops lay down their arms and surrender themselves as prisoners of war.

Back at the farmhouse, the brave woman who fetched water during the ordeal is rewarded. The grateful inhabitants throw handfuls of money into her apron. She receives more than 20 guineas.

A kind General Philip Schuyler is the first to greet them. Lifting the children from the calash and kissing them, he assures her that she need not fear. To provide more comfort and privacy, he offers to have her and her children dine in his tent. She agrees stating that “surely you are a husband and a father because you are so good to me.” 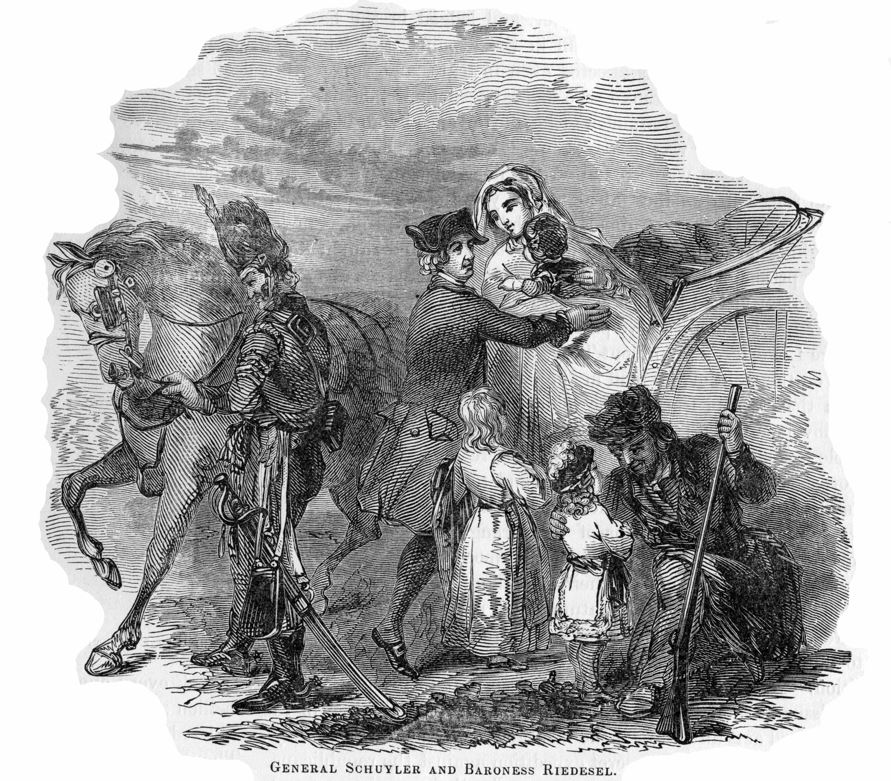 The Baroness and the General stay with the Schuyler family in Albany.

The Baroness and General begin the long trek to Boston under the terms of the Convention.

The Baroness and the General arrive in Boston. 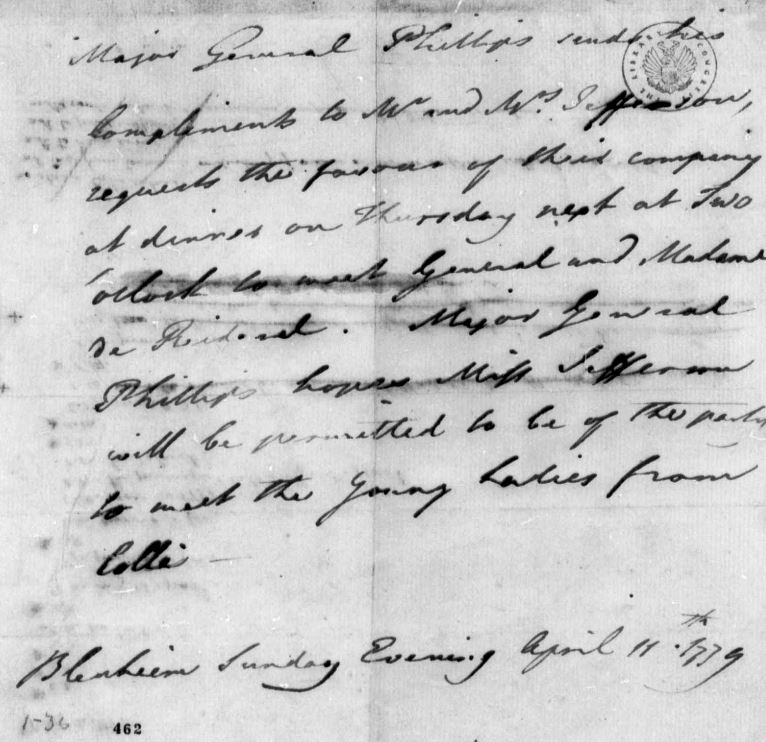