The House in the Time of the Marshalls 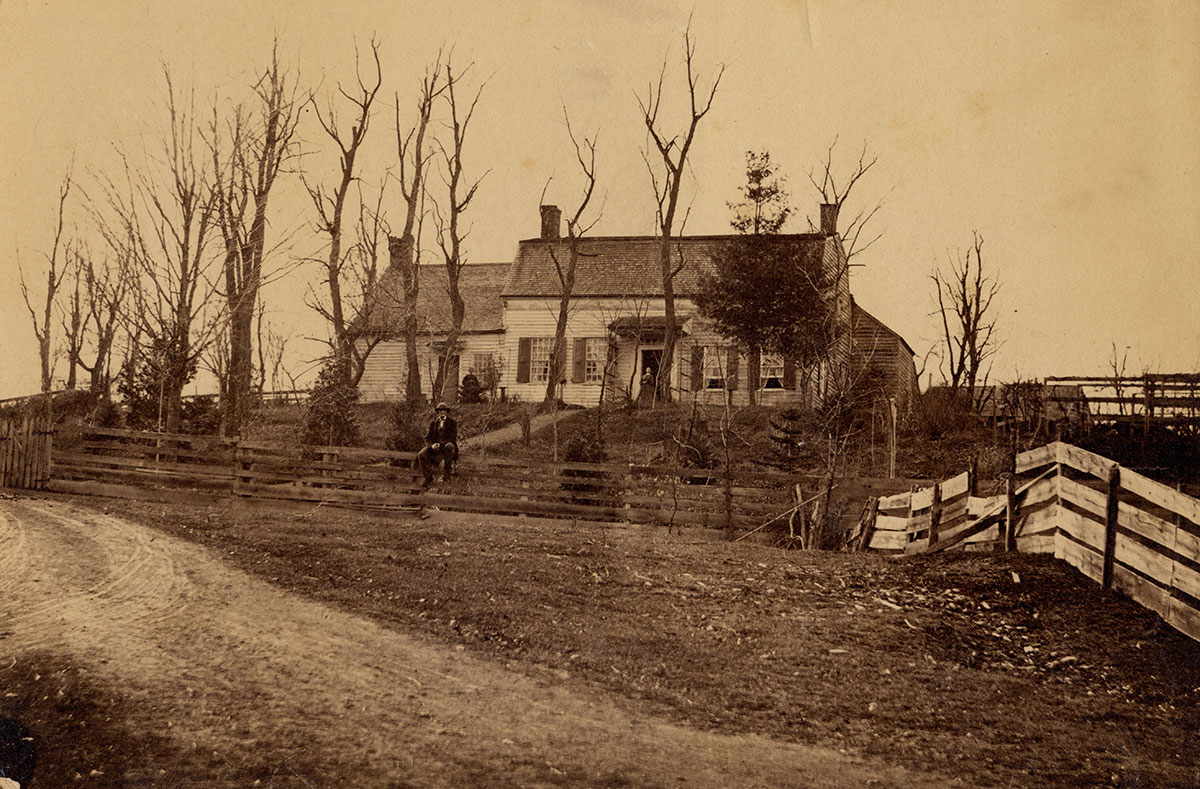 1867 photo of The Marshall House taken by William H. Sipperly

An old photograph taken by W. H. Sipperly in the spring of about 1867 illustrates the appearance of the house at that time, revealing that some modest changes had been made since the Revolution. Immediately noticed are numerous black locust trees surrounding it, two white pines then already well grown near the northeast corner and several outbuildings.

What appears to be a kitchen wing attached to the gable end of the house seems to have been added some years previously. The inside chimneys dating from the time of first construction were still in place.

The windows to the left of the front door are twelve over twelve double hung while those to the right are six over six. This detail reveals the beginning of transformation. The smaller panes were older, undoubtedly glazed with bull’s eye glass, the larger ones with cylinder glass thus reflecting the then occurring improvements in glass making technology.

Evidence of active agriculture is obvious. The Marshalls of the time were small farmers with little more to market than a few bushels of grain, perhaps a dozen hogs, wool, eggs and a few chickens. In common with their neighbors they cultivated a few apple trees for making their own hard cider.

The couple in the picture are probably Mr. and Mrs. William Marshall, the third women Jane Marshall or a household helper. Of particular interest are the trees, several of which remain to this day.

Toward the close of the nineteenth century the fortunes of the Marshalls gradually declined. A summer hostelry was conducted for a few years but about 1900 it became a boarding house for mill hands at the Standard Manufacturing wallpaper factory a half mile to the north.

General Edward Fitch Bullard, in his centennial address delivered in 1877, noted that the house formerly belonged to the Lansing family of Albany but that it had been deserted before the British army arrived from the north in September of 1777.

In his remarks he said, “It was a two storey house, having a gable or French roof, fronting east with a hall in the middle and a room at each end. One of the old rafters and the plank of the partition, each shattered by a cannon ball, are still carefully preserved on the spot by Mrs. Marshall.”

The alterations made by William Marshall in 1868 were more cosmetic than structural. The old fireplaces were removed, victims of the cast-iron stove revolution. The gambrel roof was replaced by a higher single pitch soldered tin one to enable fenestration and larger rooms on the second floor.

The south kitchen wing seen in the 1867 photo was razed and succeeded by a larger two-storey addition to the southwest corner of the building. A somewhat less substantial addition, said to have been a carriage house with small rooms above it, was semi-attached behind the new addition. A horse barn and a cow barn were built nearby south of the house at about this time.

The principal ornamentation of the house, a wrap-around-narrow front porch with bundled, chamfered posts linked by delicate arches is conspicuous. Above, a moulded cornice beneath an imposing low parapet delicately emphasizes the Italianate style popular at the time. The east facing windows became floor-to-ceiling triple hung. Shutters to match were installed.

Withal, the original exterior configuration of the house disappeared though the interior above the original footprint was little altered. Preserved, and now and then exposed, is a rectangular opening in the dining room ceiling wherein a beam, shattered by a cannonball, can be viewed.