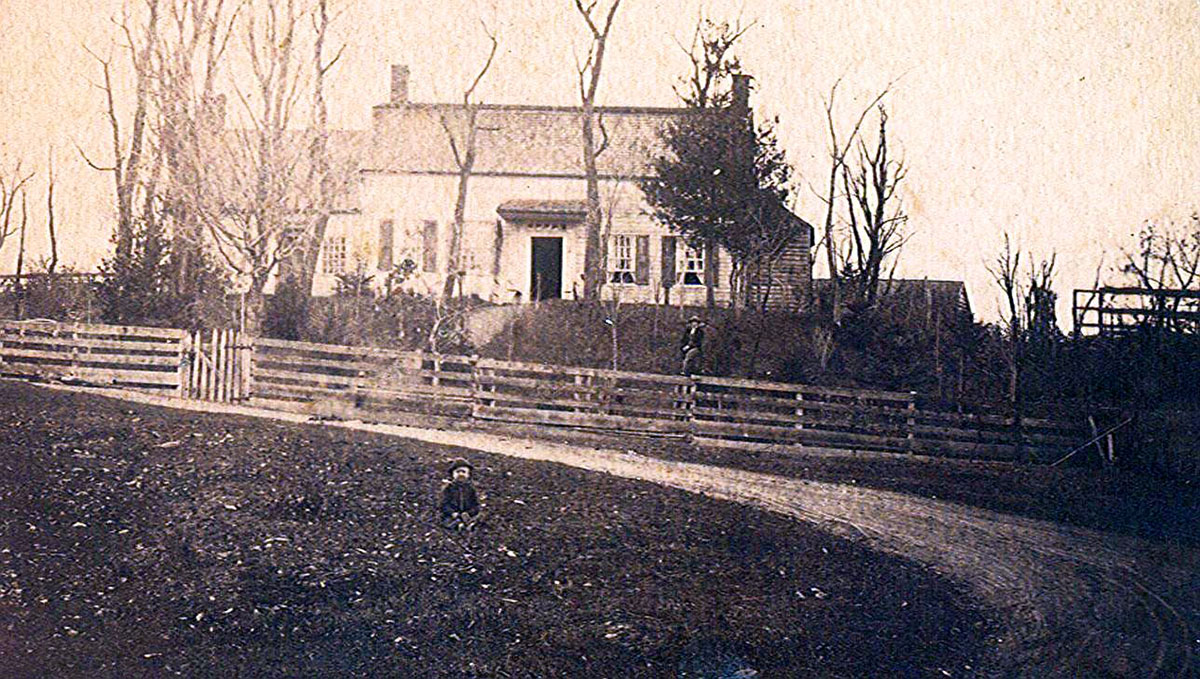 First known photo of The Marshall House by William Sipperly, 1867

The Marshall family, after whom The Marshall House is named, traces its settlement at Old Saratoga to 1768 when Abraham Marshall, newly arrived from Yorkshire with his wife, three daughters and one son, leased a farm from Philip Schuyler, where a third son, Samuel, was born. Abraham and Samuel were patriots who fought in the American Revolution.

Abraham’s daughter, Mary, married patriot Samuel Bushee, a veteran of Valley Forge and the Battle of Monmouth. In 1785 Bushee purchased what became The Marshall House farm from its first owner, Peter Lansing of Albany. He in turn sold it to his brother-in-law, Samuel Marshall and Samuel Marshall’s son, Abraham, in 1817 with the proviso that he and his wife could reside in the house with them until his death which occurred in 1840. Thus began the one hundred and thirteen year ownership of The Marshall House and its farm of one hundred and forty-five acres.

Samuel married Phoebe Benjamin, daughter of patriot William Benjamin and Abigail Fitch of Connecticut, a descendant of the family of Governor Thomas Fitch, and coincidentally, an ancestor of the present owner, David Bullard. Samuel died in 1866 leaving The Marshall House property to his son, William Benjamin Marshall and his wife, Jane Griswold Marshall.

The Saratoga County Agricultural Census of 1870 reveals that William had ten milk cows, three other cattle, three horses, seven swine and seventy-five head of sheep. With William B. Marshall’s death in 1870 the property passed to his wife, Jane Marshall, who continued to live in the house with her daughter, Jennie and her two children.

The demand for wool needed for army uniforms during the Civil War brought prosperity to the Marshalls, In 1868 William and Jane elaborated the old house by raising its roof and adding to its rear a new kitchen wing with rooms above. The Marshalls took care that the building retain its original structure, rooms and its historic cellar. The Marshall House has remained but little changed since.

Jane and her daughters, Jennie and Fannie, were proud of their patriotic forebears. On the occasion of the laying of the cornerstone of the Saratoga Battle Monument in 1877 they raised a flagpole eighty-nine feet tall topped with a Stars and Stripes measuring twelve by eighteen feet. On the lawn they served tea to three thousand visitors, furnished an elegant dinner to members of the 2nd Albany Regiment beneath the trees and helped house those who journeyed to Schuylerville to participate in the celebrations.

While continuing the farm, they opened The Marshall House to summer guests. They embellished the grounds with trees, flowering shrubs, sweeping lawn, porch furniture and manicured walkways. The Marshall ladies always welcomed visitors who were interested in the rôle played by the house during the Revolution.

Mrs. Jane Marshall passed away in 1910. Jennie, who had married, struggled to make ends meet by taking in mill hands as roomers and boarders. In 1921 the farm equipment and livestock were disposed of at auction. Most of its farmland, too, was sold off. The old house became needful of major repairs. Finally, in 1930, The Marshall House was sold to Kenneth and Adelaide Bullard who soon undertook its restoration.

The Marshalls were long prominent citizens in the Old Saratoga area. It is to them that credit is due for having lovingly preserved The Marshall House, the scene of perhaps one of the most stirring event of the American Revolution. The House itself is a study of the evolution of life and the way it is lived in this country. Whereas most historic places are museums, The Marshall House is a living Witness to History. It bears the name Marshall proudly.

Until recently, the present owners knew little about their Marshall predecessors. Then, all of a sudden, a family of Marshall descendants appeared, genealogies and old photos in hand.

In August 2013, on the occasion of Schuylerville’s great Turning Point Parade, the Bullards hosted a Marshall Family reunion. Nearly fifty Marshalls came from all parts of the country for a weekend of feasting, fun and reminiscing.

To learn more about the Marshall Family click here